As promised, I gave the class an assignment this morning. I gave the men 45 minutes to study two passages on their own—Deuteronomy 34 and Hebrews 11:24-28. The first tells of the death of Moses and the second summarizes his life. Then I had them divide into two groups and spend the next 45 minutes discussing how to teach the passage. It was an exercise in inductive Bible study and group process. One group took Deuteronomy while the other took Hebrews. Then we gathered at 11AM to share the results. 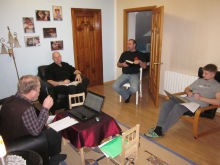 Each group had a spokesman who taught the main points of the lesson to the rest of us. They showed great insight into the passage, highlighting several significant principles.

After the two groups finished, I explained that I preached through the life of Moses about four years ago. When I came to Deuteronomy 34, I decided to do something different and creative. Rather than simply preach the passage, we held a funeral as if Moses had died the previous week. We brought in several props—wooden casket, shepherd’s staff, sandals, and tablets with the 10 Commandments. One person read Moses’ obituary while others shared memories of their good friend. Then I preached a message on Deuteronomy 34. The men liked the idea and said they were going to schedule a funeral in the near future.

In our final session, I taught through Psalm 90, a psalm Moses wrote at the end of his life. The main idea of the psalm comes from verse 12—Count your days to make your days count. 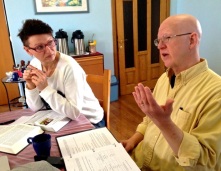 We closed the class with a time of group prayer. I have observed that Russians take prayer very seriously and treat it reverently. They stand when they pray. Not only did they pray before meals, they wanted to pray at the beginning of each class session. It was fitting that we ended with the way we began.

After a hearty lunch, the men practiced a long goodbye before heading off to their homes.

Afterwards, John & Naomi, Lena our translator, and I began the process of cleanup. Dishes were washed, beds were stripped, floors were swept, and laundry was started. Then we sat down to rest before the next meeting.

In the late afternoon, John & Naomi and Lena met with three couples to discuss the future of the House of Grace. John & Naomi are transitioning to a ministry of mentoring pastors and wanted to find the right couple to take over the ministry of House of Grace. After a long discussion, the ten of us went to dinner at a pizza place in Anapa. It appeared to be a very positive discussion.

While the men were working on their personal study and group project this morning, I was helping Naomi in the kitchen, shelling eggs for deviled eggs. They will be served tomorrow at Holy Trinity Church of Anapa’s Day of Unity.

Today’s weather was a bit cooler, dropping down into the mid 40’s. Considering it is in the 20’s at home, I’m not complaining.

All in all, it was another good day of ministry.

Another day of teaching is in the books. I began this morning with the ten plagues in Exodus 7-10 and ended with Moses losing his temper in Numbers 20. Needless to say, we covered a lot of ground. The last lesson was one of the most important. It illustrated what can happen when we don’t deal with a recurring sin. Moses killed a man in anger at the age of 40. He stormed out of Pharaoh’s presence at the age of 80. Nearing 120, he struck the rock in anger rather than speak to it. While his anger was forgiven, his loss of control and act of temper cost him his place in the Promised Land. Today’s lessons included some lively discussion and thought provoking questions. The men are thirsty for knowledge and desire to learn and grow.

The men don’t know it yet, but I will give them an assignment in the morning. I will ask half the group to study Deuteronomy 34 and the other half to examine Hebrews 11. Then they will come back and teach the main idea of the passage to the other group. I will close the class with Psalm 90 which Moses wrote at the end of his life.

One of the features of House of Grace are the meals. No one goes away hungry as John & Naomi Musgrave serve tasty and plentiful meals. They do it to honor their guests and treat them as special people. From a US standpoint, the meals cost about $2 per person. From a Russian standpoint, the meals include items that the average person could not afford. During dinner, Lena and Vanya were discussing the cost of things such as meat and vegetables as well as the merits of sugar, honey, and fructose. They commented how much the cost of food has gone up recently. (When Carol and I were here last year, $1 = 32 rubles. Today, $1 = 62 rubles. It got as low as $1 = 70 rubles recently. It’s great for Americans but terrible for the Russians.) It makes John & Naomi’s hospitality that much more valuable. 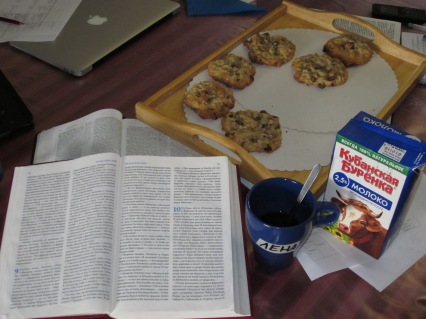 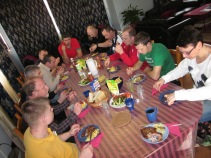 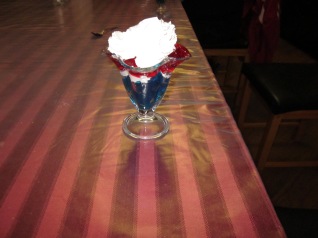 The weather this week is downright balmy. It got up to 57 degrees F today. Considering it’s in the 20’s back home in western MA, it’s quite warm for me. It’s the first time in weeks I haven’t worn a hat indoors to keep my head warm. On the drive from the Anapa airport on Wednesday, I commented that I’m not used to seeing so much green. While I am enjoying the warmth, my translator was bundled up in a blanket as she was cold. Guess it’s a matter of perspective. 😉

Posted by wheelsms on February 27, 2015 in House of Grace, Photos, Russia 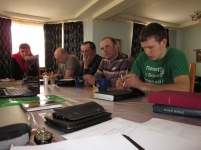 Thanks to all of you who prayed for the first day of class. God answered prayer. After a night of restful sleep, we enjoyed a good day of stimulating discussion.

Students started arriving about 9:30AM and the first session began at 10:30. 10 men are part of the class, along with Lena, our translator. During the opening session, I asked the men to introduce themselves—who they are, where they are from, and what ministry they are engaged in.

Half of the group comes from the Holy Trinity Church in Anapa, where John Musgrave serves as one of the elders. Vanya, the pastor, and Kostya and Kolya, two of the elders, are part of the class. Several other men are part of a church/alcohol rehabilitation ministry in a village near Krasnodar pastored by Sasha. Around noon, Sergey arrived from Crimea. He traveled all night by bus to come for the day.

Then we reconvened at 1:45 and went until 5:10 when we broke for dinner. All told, about six hours of teaching today. I covered the first six chapters of Exodus from Moses’ birth up to the beginning of the 10 Plagues. Considering I am one-third of the way through my notes, I guess I am on track for a three-day class. Part of the time I lectured and part was filled with discussion and Q&A. There was much more discussion than in previous classes. John mentioned that the Anapa elders meet each week to dissect and discuss the upcoming sermon. Their training was evident in the quantity and quality of their questions. It made for a very interactive and interesting experience.

After dinner, I talked for quite a while with Pastor Sergey from Crimea. Due to the changing political climate, a large number of people not only left his church but the area as well. It has made for a challenging ministry. He asked a number of questions about how we do evangelism, Christian Education, special services, recovery programs, and more. Later, Pastor Sasha joined us for the discussion on recovery programs. Sasha’s ministry involves an alcohol rehabilitation center that makes use of a former collective farm. What they grow helps support the ministry.

As I listen to these men talk about their respective ministries and families, I am humbled by their commitment to Christ. My problems appear very pedestrian compared to their experiences.

Posted by wheelsms on February 26, 2015 in House of Grace, Russia

Monday – flew from Boston to New York JFK in the afternoon. Flew overnight from JFK to Moscow, arriving Tuesday morning.

Tuesday – Connected in the evening with John & Naomi Musgrave, who flew from LAX. 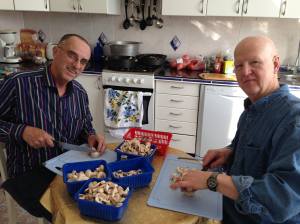 Wednesday – The three of us flew from Moscow to Anapa. We went grocery shopping for the meals for the week. After getting the food stuff home to House of Grace and put away, we started preparing some of the meals we will serve the students over the next few days. Afterwards, it was time to put up our feet, relax, watch a movie, and try to stay awake into the evening.

The students arrive tomorrow morning, Thursday, at 10AM for the first session of the three day class on the life of Moses.

Thanks for praying. We’ll keep you posted.

Posted by wheelsms on February 25, 2015 in House of Grace, Russia

When God opens a door 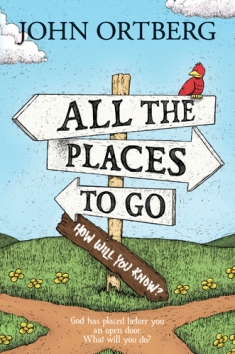 Book Review: All the places to go, how will you know?: God has placed before you an open door. What will you do? by John Ortberg

The theme of the book is taken from Revelation 3:7-8 where God tells the church in Philadelphia, “I have placed before you an open door that no one can shut.” It symbolizes “boundless opportunities. Of unlimited chances to do something worthwhile; of grand openings into new and unknown adventures of significant living; of heretofore unimagined chances to do goo, to make our lives count for eternity.”

Using biblical examples from the lives of Abraham, Jonah, Elijah, and others, as well as stories from his own life, the author provides a unique look into the age-old question of how to discover God’s will for your life. Like all of his books, the stories are humorous, real, practical, helpful, and encouraging.

Along the way, the author gives insight into why some people respond positively to open doors while others avoid risk. He addresses the subject of which doors to walk through and which ones to avoid. He also provides a helpful chapter on why God might close a door and how to respond appropriately to it. The book provides helpful insight as to how to recognize divine opportunities in life, how to overcome the fear of missing out or of making the wrong choice, and how to walk through open doors with confidence.

Disclosure of Material Connection: I received this book free from the publisher through the Tyndale Blog Network http://tyndaleblognetwork.com/ book review bloggers program. I was not required to write a positive review. The opinions I have expressed are my own.

I have so much to learn about God

Posted by wheelsms on February 23, 2015 in Quotes, Tim Challies