RSS
← Don’t be a “Whatever” Christian
Switch on Summer →

About an hour north of London, England, lies the village of Tewin. St. Peter’s Church in Tewin dates back to Saxon times. While the church is an interesting structure, what people come to see is the massive single tree with four trunks that grows over the grave of Lady Anne Grimston, who was buried in 1713.

Lady Anne was a proud, obstinate woman who enjoyed her wealth and lands and the society of her friends. She believed that there was nothing else in life except what she experienced—her riches, her grand house, her friends, the fine dinners, and the elegant clothes she enjoyed. There was no eternal life, no heaven and no hell.

Her friends tried to tell her otherwise, but she proudly stated, “I shall not continue to live. It is as unlikely that I shall continue to live as that a tree will grow out of my body.” She went so far as to make a challenge to heaven, saying, “If, indeed, there is life hereafter, trees will render asunder my tomb.”

Lady Anne Grimston died November 22 1713, and was buried in a strong tomb made of marble. Many years later, the marble slab over her grave was found to have moved from its position. The builders fixed it firmly in place. Again the heavy marble slab tilted slightly on one side, and in the middle was a crack, with a tiny bunch of leaves bursting through.

The crack was closed with cement, and the slab put back. But again the slab was lifted up, the crack opened wider than ever, and the thin trunk of a tree appeared. They repaired the tomb and built tall iron railings around it to hold the masonry together. But the young tree made its way, breaking the masonry, destroying the walls of the tomb, and tearing the iron railings out of the ground.

Today, growing right from the heart of Lady Anne Grimston’s grave in St. Peter’s churchyard in Hertfordshire County is one of the largest trees in England, with four trees growing from one root. The trunk of the tree has grown fast through the iron railing, which cannot be moved.

Once the Sabbath concluded, Mary Magdalene, Mary the mother of James & Joses, and Salome purchase spices to anoint the body of Jesus (1). Rather than trying to preserve his body from decay, however, they want to demonstrate their devotion to the Lord.

The women set out at dawn (6:00AM) on Sunday morning (2). On the way there, they wonder who will move the stone for them (3). The women did not expect Jesus to rise from the dead. When the women arrived on the scene, they immediately noticed that the very large stone covering the entrance had been removed (4). 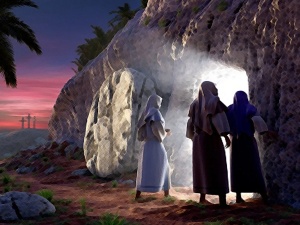 Upon entering the tomb, the women were startled by the presence of a young man sitting on the right hand side of the burial chamber (5). Luke (24:3-4) and John (20:12) mention two angels, but Mark only speaks of one, presumably the spokesman. Their white clothes indicated the dazzling character of their glory. The women were alarmed when they encountered the divine messenger. It’s not every day you meet an angel.

Sensing the women’s distress, the angel commanded them, “Don’t be alarmed” (6). The angel knew they were looking for Jesus of Nazareth. His greeting reassures them they did not go to the wrong grave. The angel announces that Jesus is not dead. He has risen!

The empty tomb does not prove the resurrection. It simply raises the question, “What happened to the body?” The question is answered decisively by the angels’ statement, “He has risen.” The angel invites them to examine the evidence. The women could see the body is not there. The tomb is empty and confirms the resurrection.

The women were given a task. They were to go and tell Jesus’ disciples that they would be reunited with him in Galilee (7). Peter was singled out not only because he was preeminent, but because he was forgiven and still included in the Eleven despite his triple denial. The message given to the women was not for them alone. It was for all of Jesus’ followers.

The women were confused and terrified by what they saw and heard. The women fled from the tomb just as the disciples fled from the arrest, trial, and crucifixion (8).

Rather than resolving the story, Mark leaves his readers to ponder the meaning of the empty tomb as interpreted by the angel’s revelatory message. He wanted his readers to continue the story in their own lives. Mark is asking the question, “How will you respond to the announcement of the resurrection?”

By stating that the women told no one, Mark challenged his readers to assume the responsibility of telling the good news to everyone.

The Lord is Risen! He is Risen Indeed!

This is the synopsis of a message preached at First Central Baptist Church in Chicopee, MA, on May 22, 2016. It is the final sermon in a series on the Gospel of Mark. Please click on the link to download a copy of the sermon notes.

Posted by wheelsms on May 22, 2016 in First Central Bible Church, Gospel of Mark, Preaching, Scripture

← Don’t be a “Whatever” Christian
Switch on Summer →