Earlier this month, the week before I left for Russia, Carol and I were in Atlanta, GA, for Walk Thru the Bible Ministries InstructorFest 2017. It was an opportunity to reconnect with old friends and compatriots and to be trained in WTB’s newest event, OTLive. 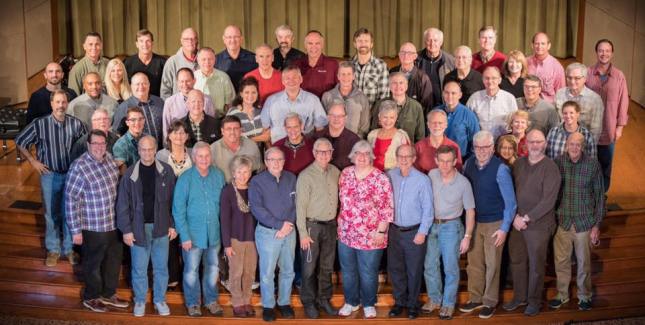 I was recognized as part of the “Class of ’87”, a group of instructors who have now served for 30 years. 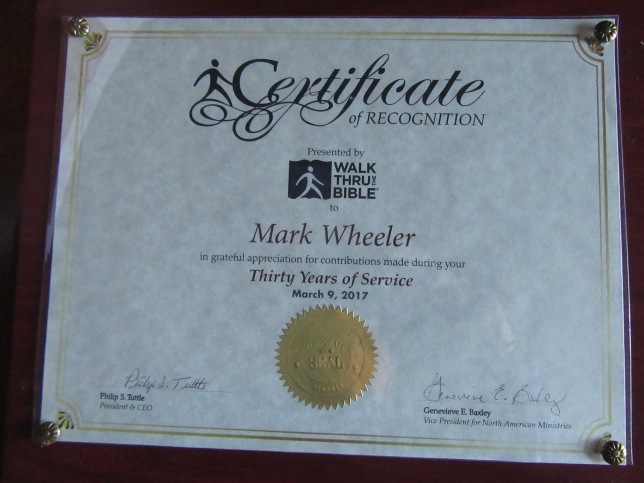 This morning, I gathered all the notebooks for the various seminars, classes, and events I have taught for WTB for the past 30 years. It is quite a collection.

As I have written on previous occasions, I owe a debt of gratitude to Walk Thru, and I still love teaching the events. During our time at the conference, Carol thanked Phil Tuttle, the current president of the organization, for Walk Thru “being a rock.” Over the past 30 years, Carol and I have gone through many challenging, difficult, stretching seasons of life. Walk Thru as an organization, and as a family of caring individuals, has been one of the rocks we have leaned on.

Posted by wheelsms on March 30, 2017 in Photos, Walk Thru the Bible Ministries

We have two seasons–Winter & Road Construction

Kind of describes some of the roads we traveled in Kalmykia, Russia, and a few at home in MA.

A thrilling conclusion to Joel Rosenberg’s J. B. Collins series 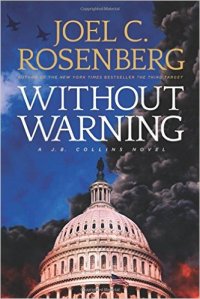 Book Review: Without Warning: A J. B. Collins Novel, by Joel C. Rosenberg

Like the previous books in the J. B. Collins series, Without Warning is a white-knuckle thrill ride you won’t be able to put down. It blends front-page headlines with thrilling suspense. It begins with an attack on U.S. Capitol during the President’s State of the Union address by ISIS forces and doesn’t let go until the final page.

Without Warning is the latest offering by author Joel C. Rosenberg. It is the third and final book in the series on the Islamic State involving New York Times foreign correspondent J. B. Collins as the main character. The book picks up where the previous book, The First Hostage, leaves off.

In the first book in the series, The Third Target, Collins is reporting from the scene of a devastating attack by ISIS terrorists on an Arab-Israeli peace summit in Amman, Jordan. Israeli and Palestinian leaders are critically injured, Jordan’s king is fighting for the survival of his kingdom. And the U.S. president is missing and presumed captured. The second book, The First Hostage, tells the thrilling story of the search for the President. In this book, J. B. Collins is part of a team searching for the ISIS leader, Abu Khalif, in an effort to bring him to justice. The hunt goes from the U.S. Capitol to Bar Harbor, Maine, to Tel Aviv to Cairo to Istanbul and beyond.

As Rosenberg has proven in his previous books, he has the unique ability to blend fiction and non-fiction. He weaves the reality of current events in the Mideast with a fast paced, believable story. The author also laces spiritual principles and a gospel message into the pages of the story. You find yourself on the edge of your chair wondering how the story will turn out.

Disclosure of Material Connection: I received this book free from the publisher through the Tyndale Blog Network http://tyndaleblognetwork.com/ book review bloggers program. I was not required to write a positive review. The opinions I have expressed are my own.

Why we struggle with sin 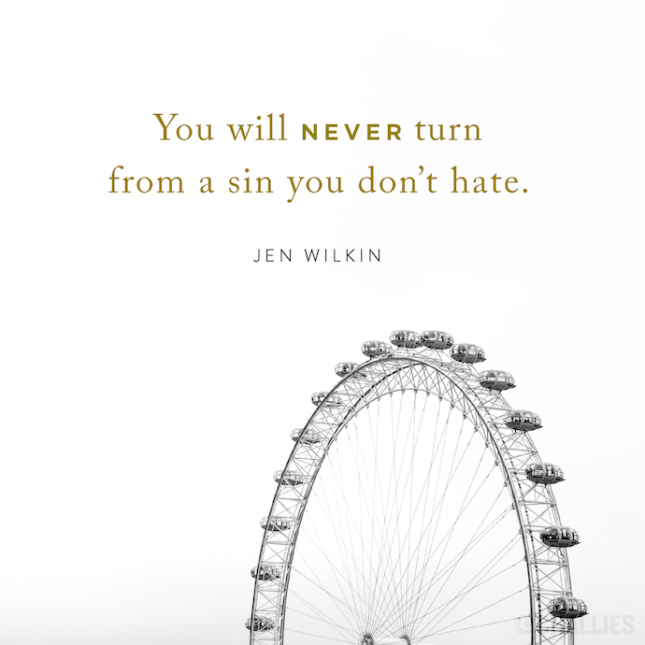 Posted by wheelsms on March 27, 2017 in Quotes, Theology, Tim Challies 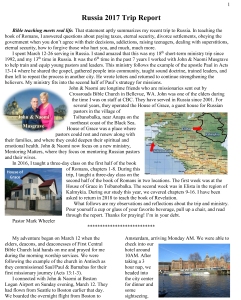 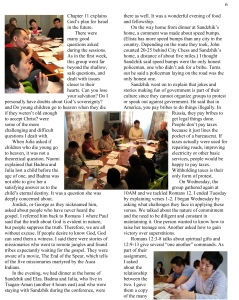 Here are the pictures from the week in Elista, Russia. I had 12 people in my class on Romans and John Musgrave had 6 men in his class on church leadership. We were staying at City Chess, a complex built in 1998 and the host of the World Chess Championships in 2006. It was a great week. Thanks for praying. 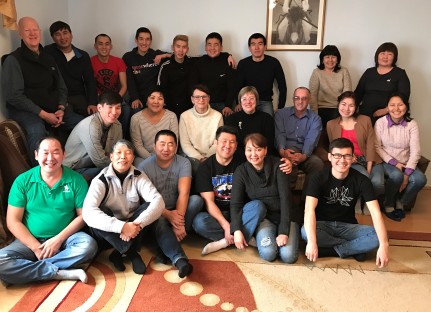 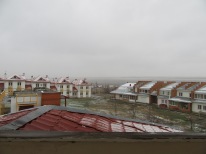 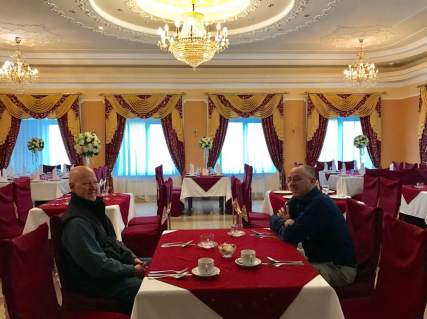 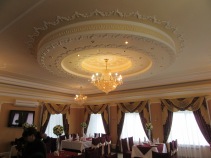 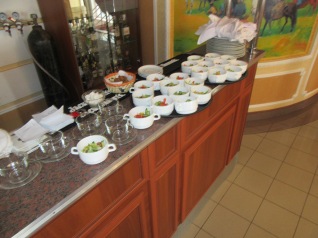 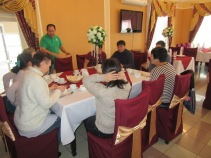 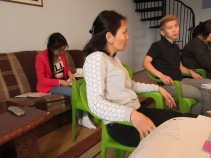 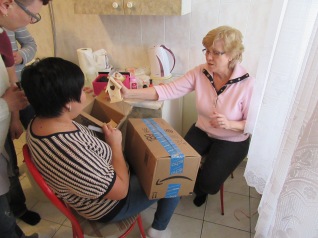 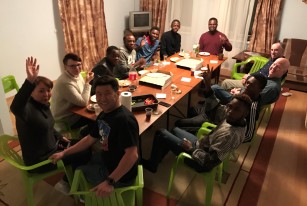 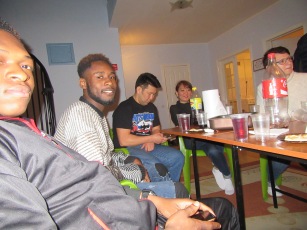 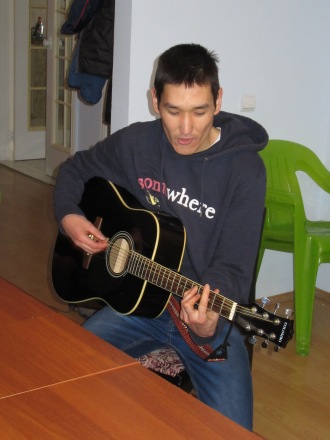 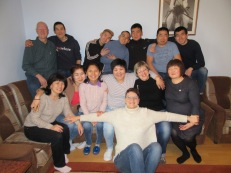 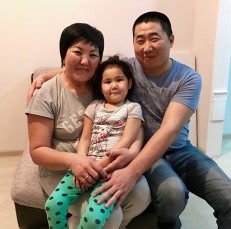 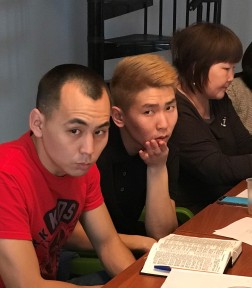 Today was the final day of our class in Elista. A few of the students came early and were led in worship by Slava, who brought his guitar.

We spent the first hour talking about Romans 16. I explained that often we want to skip the first part of the chapter because it is just a list of names. I emphasized the words Paul uses to describe these individuals—hard worker, risked their lives, servant, chosen, beloved, kinsman, approved. I also pointed out that some of the folks are not named, just referred to. In this life, people may not remember your service, but God does, and he will reward us for what we do for him.

After spending 15 chapters teaching sound doctrine and how to practice it in daily life, Paul then warns the Roman church of the danger of false teachers. I stressed that we need to be vigilant and on guard against those who will seek to divide us over minor, non-essential issues. I encouraged them to work towards maintaining unity.

Since I ended early, I gave them a 15-minute assignment to think about two things—(1) What are the lessons you learned from our study of Romans? and (2) What is one lesson you want to put into practice this week? When we came back together, they shared some very personal lessons and heartfelt desires for growth. Rather than try to apply a dozen lessons, I encouraged them to focus on one. We then closed with a time of prayer for one another.

After lunch, the two groups (my class on Romans and John Musgrave’s class on church leadership) gathered for a group picture. Sandzhik gave thank you gifts to John & Naomi Musgrave, Lena, my translator, and me. He said he had asked people what they were learning and he was impressed and encouraged by what they were taking to heart. He closed by saying he was looking forward to our next visit and the classes we would offer.

The afternoon was spent relaxing, reading, and running errands. In the evening, we had dinner at the home of Mergen and Elza.

We start the homeward journey tomorrow morning. We will drive from Elista to Krasnodar on Friday, and then to Anapa on Saturday, where I will catch a flight back to Moscow. On Sunday, I will make the long journey home—Moscow to Amsterdam to Boston.